Is there really anything better than warm apple crisp filled with hints of cinnamon, nutmeg, and brown sugar? It's fall cooking at its finest.

I've always been a fan of apple crumb pie, but now I do believe this gluten-free apple dessert will become another addition to our fall baking traditions.

But don't let the gluten-free part trip you up. You can make this a gluten-free crisp or a gluten-filled crisp, and it will be delicious either way.

Making apple oatmeal crisp is really as easy as prepping the apples and crumbling on a sweet topping. While it takes a little bit to bake, it's actually really quick and simple to throw together.

I even like to sometimes make baked cinnamon apples without the topping.

Not quite in the mood for apple crisp? Try peach crisp instead.

If you’d rather skip all of my baking tips, important baking info for this recipe, and similar recipe ideas – and get straight to the gluten-free apple crisp recipe – just scroll down to the bottom, where you’ll find a printable recipe card with a longer how to video.

I grew up eating fruit cobblers. Cobbler in my mom's kitchen meant a fruit filling with a bottom crust and crumbled pie crust on top.

Apple crumble is made with either a biscuit dough or a regular pie dough crumbled on top of the apple filling. And sometimes it'll have a bottom crust too.

The topping for a fruit crisp, however, is made with oats, in this case, gluten-free oats. And I use Cup4Cup Gluten-Free Flour, which replaces regular all-purpose flour.

Always remember to double check ingredient labels to make sure all of your ingredients are truly gluten-free. And remember, all of the ingredient amounts you’ll need are in the printable recipe card below.

Paring Knife and Cutting Board

While you can make an easy apple crisp with apple pie filling, I really recommend fresh apples.

I also recommend finding apples that are in season because you'll get a lot better flavor. And if you buy seconds at a local orchard, produce stand, or farmer's market, you'll get them cheaper too.

Personally, I love making pies, cobblers, and crisps with Jonathan apples, Jonagold apples, or Granny Smith apples. Jonagolds are a cross between Jonathans and Golden Delicious, and they are so sweet, tart, and crisp.

For this recipe, I used Granny Smith. I use a very handy apple peeler/corer to make the job of prepping the apples quicker and easier.

More of the best apples for apple crisp include:

HOW TO MAKE GLUTEN-FREE APPLE CRISP

Making a fresh apple crisp involves a couple different sets of steps. You have to both prep the apples and the crumble topping.

To prep your apple filling…

Then you'll just take that apple mixture and pour it into a smaller 8″x8″ pan or 7″ to 9″ baking dish and set it to the side.

To get your apple crisp topping ready…

Then just bake according to the instructions in the recipe card below. You'll bake it for about an hour, or until the topping is golden brown.

I love serving apple oatmeal crisp with vanilla ice cream. Oh.my.word. It is so good!

I can't wait for you to try this recipe.

MORE FALL RECIPES FOR YOU TO TRY:

DOES APPLE CRISP NEED TO BE REFRIGERATED?

If I were making this ahead of time, I would likely refrigerate and then possibly reheat before serving. I would refrigerate it, mainly because of the sour cream in the recipe.

Just cover it with a sheet of wax paper and let it rest in the fridge.

CAN APPLE CRISP BE FROZEN?

Yes, it can. Just be sure to store it in an airtight container so it doesn't get freezer burn.

And allow plenty of time to thaw in the fridge before re-heating.

There are a few things you can do to switch this recipe up.

Another one of our favorite fall treats is this caramel cream cheese apple dip. It's so yummy, and my kids just love it!

I love a good dump and go recipe, and caramel apple dump cake with pecans is just that. It's so easy to make!

And it just wouldn't be fall without my favorite pressure cooker apple butter, made in the Instant Pot.

GET THE PRINTABLE RECIPE

If you love this apple crisp recipe as much as we do, please write a 5 star review, and help me share the recipe on Facebook and Pinterest! *Or you can use granulated sugar. *If you'd rather not make it gluten-free, switch out the gluten-free flour for regular all-purpose flour instead. And use regular rolled oats instead of gluten-free oats. 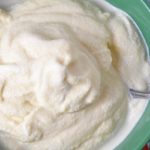